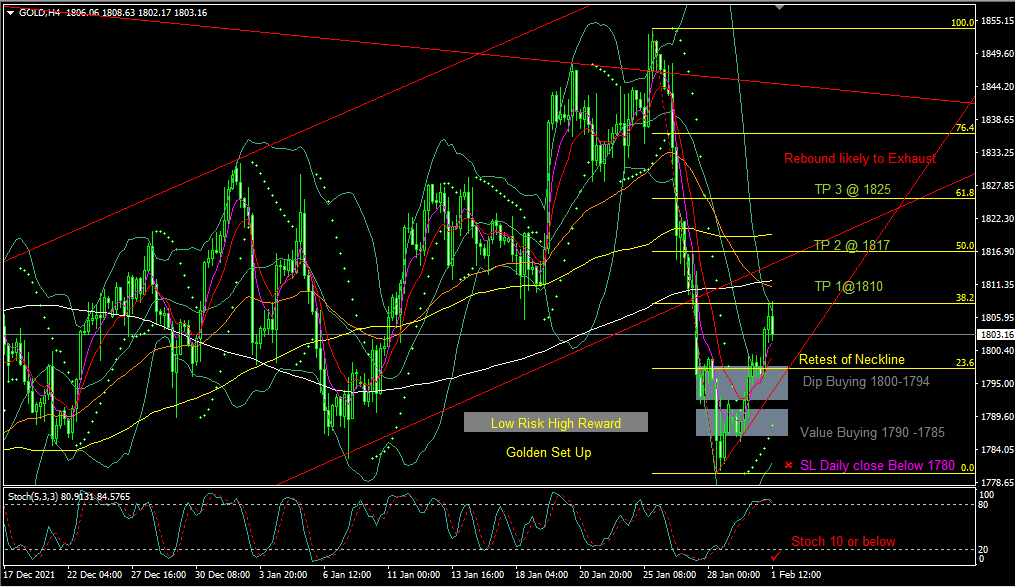 After two weeks of straight decline due to Fed's Hawkish March rate hike announcements that pushed the precious metal from 1853 down to 1780 resulting in $73 fall, weakness in Dollar bullish run gave support to Gold which initiated a short term rebound in prices.

The current rebound should not be seen as any reversal or end of bearish momentum. This recovery is nothing more than a dead cat bounce effect which usually occurs when there is a sharp fall in prices in a short span of time and such reaction lasts for very short term until sellers start hunting the resistance and supply zone again.

Overview: As seen on the H4 time frame chart, Stochastic reading 85/85 is approaching overbought levels and a retest of 1800 neckline is very likely which can extend lower to reach 1794

Short term speculative buying may resurface on the test of support at these levels. If prices slide further to 1790-1785 some more retail buyers may join for value picks. There is some potential of retest of swing low of 1780 followed by a rebound ,creating initial double bottom to be confirmed by prices regaining above 1800 neckline that the formation may aim for Targets 1810 - 1817 - 1825

Since the short term trend has turned bearish, Bears are very likely to come for selling at resistance areas and a Dily close below 1797 followed by Daily close below 1790 will be initial signs of extended correction ahead for another leg deeper with immediate targets 1758 and 1740